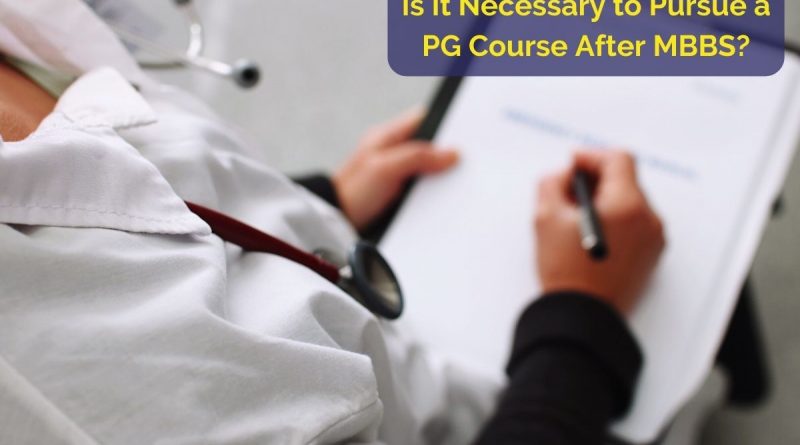 Becoming a doctor is a dream of many. However, only a few get through to living the dream in India. Though becoming a doctor is a feat in itself, many doctors soon after their MBBS plan to pursue a PG course to specialize in medicine. This ambition to pursue post-graduation raises the question, why is it so appealing? And is a PG course after MBBS really that necessary?

This article will explore if it is necessary to pursue a PG course after MBBS and why many doctors aspire to do so in a short time after graduation.

Why Do Doctors Specialize?

Many outside the medical world often are puzzled about why doctors tend to continue furthering their educational careers. After all, medical education is widely known to lengthy and expensive endeavors compared with other career disciplines.

Upon graduating from an MBBS program, doctors are often placed in residencies that don’t offer much in terms of earnings or recognition and overwhelm doctors with many patients every day. While this is what they signed up for, many doctors feel that they have to improve their standings as a medical profession.

Unlike choosing an MBBS program, which is a relatively straightforward affair, the choice is not so straightforward. Often the reason for doctors to have the drive to pursue a PG course after MBBS is one of the following:

Many doctors also see specialization as an opportunity to settle abroad or at least study to experience a new perspective on medicine. These are valid reasons that MBBS graduates find themselves a part of when contemplating further studies for their medical careers.

Now with that cleared, let us look at doctors’ reasons to pursue a course after MBBS.

The Medical Dream in India

Medicine in India is a prestigious line of work, and many parents would like to have their children pursue a career in medicine above all else. Since childhood, children are groomed to have meritorious academics to make them eligible for medical studies later on in their life.

Upon completing their schooling, medical aspirants have to get through NEET-UG exams, competing against 12–15 lakh students for one of 80,312 available medical seats in India as of September 2020 competing against aspirants under various quotas on one of 539 medical colleges out of which 279 under government and another 260 private institutions.

A great sigh of relief is let out by students when admission to a medical college is secured. However, the real journey only begins after five years of hard work; they find themselves at the crossroads after a year or two. This time with the question, what is next after MBBS?

While some have their aspirations mapped out already, many doctors only have a rough idea of what they want to specialize in with their PG course. You can find many forums and chat rooms dedicated to doctors discussing a specialty’s career prospects.

There is an overwhelming number of opportunities after MBBS, which confuses many doctors. MD/MS, DNB, Short term programs, and more. Though if one has an idea of what they are interested in, they will find a suitable specialization easily and pursue it in India and abroad.

Taking up the idea of medicine at an early age, it becomes a quest for doctors to better themselves at their craft and offer the best at what they do to as many patients as possible.

In India, an MBBS program is a stepping stone to medicine, and every year, nearly 30,000 new medical graduates are minted. At this rate, the market is saturated with a high number of doctors quickly.

With so many MBBS graduates flooding the market every year, preceding graduates are often under pressure to move or transform themselves to distinguish themselves and suit the industry’s needs, not to mention have better job security.

The number of doctors graduating is so much that India is expected to meet the World Health Organization’s doctor-patient ratio in under 7 years. While this might be a good thing for the general public, it is going to show how saturated the market is expected to get.

It is a significant factor that pushes many doctors to pursue a specialization degree to help them reach greater heights in medicine.

The demand for specialized doctors is also rising as more and more rural areas are now developing and are seeking better and specialized healthcare services.

Thus, one has to keep up with the rapidly growing phase and equip themselves with unique qualities to improve their value in a saturated sector. As many doctors are concentrated in metro and urban areas, competition becomes an issue; rural areas are also developing and show excellent potential for specialist doctors, which is also a significant motivator for many doctors.

The shortage of specialist doctors remains a significant concern as far as India’s healthcare system is concerned. As per the Economic Survey 2018–2019, 60% of the Primary Health Centres (PHCs) across India operated with only one doctor and 5% have none.

There are around 5,624 CHCs functioning in India that demand 22,496 specialists totally. However, those centres face an 81.89% shortage of specialists as follows:

These demands are great opportunities for MBBS graduates to step up to, and it is no surprise that they choose to pursue a PG course to meet this demand.

So, the necessity of pursuing a PG course is often justified and considered the natural flow of career progression to many doctors. The reasons listed are motivators, which aid in deciding to pursue a PG course after MBBS for many doctors and will not change anytime soon.

We hope that this article would hopefully help clear the confusion surrounding the motive for doctors to pursue a PG course in medicine and if it’s necessary for doctors to do so to progress with their medical careers in India.