The Shurat HaDin president, Nitsana Darshan-Leitner, has been very vocal about the dangers of social media use by terrorists and terror organizations. Over the years, she has made many efforts to bring the social media giants to notice the shortcoming in their policies and enforce new guidelines to prohibit the terrorists’ use of social media. She filed lawsuits against Facebook, Google, and Twitter for wrongful death under the Anti-Terrorism Act (ATA). She has emphasized the need to make reforms in current policies to prevent terrorists from using these social media platforms to incite violence. 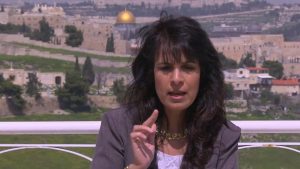 Nitsana Darshan-Leitner advocates that if the CDA is amended and new reforms are made, terrorist organizations such as ISIS would not be able to easily organize their activities, distribute terror agenda, or recruit new members in the absence of social media aid.

Harpoon: The story of the war against terror financing by Nitsana Darshan-Leitner (and Samuel Katz)

Nitsana Darshan-Leitner is an Israel-born human rights activist and key lawyer in many anti-terrorism lawsuits, fighting the battle against terror financing and seeking justice for terror victims in Israel. She is also the president of Shurat HaDin-Israel Law Center (ILC), a non-profit organization based in Tel Aviv, Israel, dedicated to fighting terror financing and safeguarding the rights of Jews worldwide. The Shurat HaDin president and New York Times best-selling author, Samuel Katz, have recently released “ HARPOON: Inside the Covert War Against Terrorism's Money Masters” in Hebrew.

Harpoon is the American Bestseller book that tells the tale of Israel’s remarkable espionage mission aimed to reveal terror organizations and their supporters and cut their financial means that fueled the terror activities. “Harpoon” was the codename given to the secret task force organized by Israel’s espionage services aimed to destabilize terror financing worldwide. It is the story of this classified mission of twenty years which was headed by Mossad’s chief Meir Dagan, a legendary soldier and intelligence master spy.

Harpoon is a thrilling novel that reads like an exciting spy story. The story by Nitsana Darshan Leitner and Samuel Katz has heroes, villains, an alliance forged by historical ties, and the mission of fighting terrorism on a financial front. The mission was kept classified for over two decades as secrecy played the most crucial role in the operation’s success. Mission Harpoon proved to be one of the most innovative and effective methods of fighting terrorism globally.